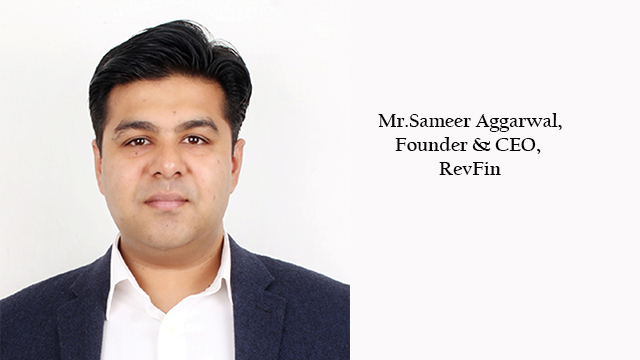 RevFin is a financial technology (Fintech) start-up that is aimed at building the world’s most advanced digital platform. The platform will be used to underwrite and manage consumer loans through our own NBFC. Through the unique approach to underwriting, rich value proposition, and a differentiated distribution model, RevFin plan to build a lending book of Rs. 3000Cr in the next 5 years, with ROE of 20%+. With the specialization in product profitability management, credit risk and analytics. Mr. Sameer Aggarwal (Founder & CEO of RevFin) has worked in both prime and sub-prime lending space for approximately 13 years in over 15 countries. In a conversation with Jayanta Ghosh, Editor-in-Chief, DeviceNext, he explained about RevFin and how they are providing financial services in the tier 2 and tier 3 towns.

How important is the EV market in India.

As per Society for Manufacturers of EV, there are 1.75mn electric three wheelers on road in India. But the actual numbers will be higher because in initial days the three-wheelers were not registered. Initially, the environmental concerns primarily augmented the concept of EVs in India. For this, the Central and State Governments have initiated various policy decisions for faster adoption of EVs. In India, electric vehicles are here to stay, especially in smaller cities and towns. The low cost of buying and operating three-wheeler EVs has paved way for employment generation for people in India which has been further boosted by the growth of e-commerce, hyperlocal delivery and last mile connectivity in smaller towns.

These sectors themselves have seen growth in the pandemic which can mean further growth for EV sector. E-rickshaws area big success in India, states like Delhi, Rajasthan, Uttar Pradesh, Bihar and West Bengal where this mode of transport has been largely adopted as a means of last mile connectivity for both passengers and goods delivery on a large scale. The segment has achieved widespread success as it is environment friendly, noise-free and pollution-free. Adoption of e-rickshaws has increased the employment for the masses in tier 2 & 3 cities in India. The owners/drivers of e-rickshaws earn around Rs 25,000 per month which is 3X increase in their average monthly income they otherwise earn. In a way this helps in improving their living and social status.

What are the main challenges these days faced by potential buyers?

The automobile industry in India is one of the fastest growing sectors contributing to the growth of the economy. The sector is witnessing major changes with the emergence of technology and, electrification. Despite these developments there are many challenges limiting the growth of the EV industry. He main challenge is the lack of credit supply in the market, with very few banks and NBFCs operating in this space. Other issues are identifying the right product as there are several brands and low differentiation or standardization in products.

How RevFin plays a key role in enabling the users?

Our foremost aim is to provide better financial services and livelihood to the unbanked population in India. Major chunk of our customers lives in tier 2 & 3 towns, is semi-literate and has never taken a loan in the past. Such users are generally excluded from form all ending channels considering their financial and demographic background.

RevFin leverages technology to play a vital role in enabling such marginalized segments of customers, who may be financially marginalized but own a smartphone. Our digital platform allows such smartphone enabled customers to apply for loan anytime, from anywhere. The application procedure is quite simple and takes under 10 minutes. Furthermore, 85% of the customers take their first loan from RevFin hence there is no credit bureau record for them. We have created very innovative techniques like biometrics, psychometrics and gamification to underwrite such customers.

As per the Society for Manufacturers of Electric Vehicles, there are 1.75 million-plus electric three-wheelers on Indian roads which is a huge number as compared to a mere 8,000 electric cars in the country. The accomplishment of e-rickshaw in India is a good example for keeping a progressive growth of EV industry thus keeping the industry workable in the country. It is estimated that in the period 2018-2025, the Indian e-rickshaw market will likely touch $5 billion at a CAGR of 9 per cent.

Fintechs are playing a critical role in mounting the ecosystem of electric vehicles. Leveraging digital technology extended by Fintechs when combined with technology from various other players in the ecosystem like insurance providers, delivery partners, e-commerce players, manufacturers of EV equipments etc, can build a healthy and scalable model for EV sector in India. Proper attention from government bodies, Fintechs and investment companies can strengthen the sector further. Through effective policies and stimulus, the EV sector can flourish thus improving the sector and contribute to the economic growth of the country.