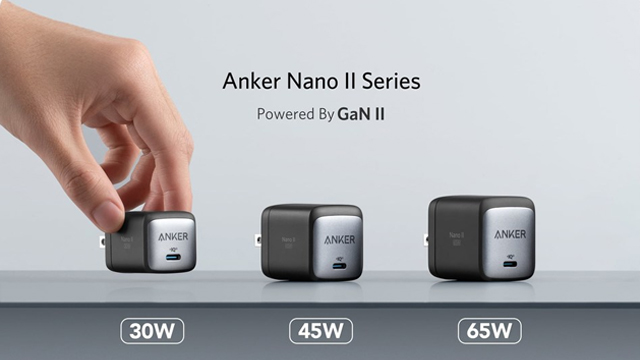 “GaN II is the next big step towards a hassle-free charging experience,” said Steven Yang, CEO, Anker.  “With the new generation of GaN II technology, the Anker Nano II charger series is not only smaller and more portable, but also makes a leap forward in compatibility and charging safety.”

Nano II Charger SeriesAnker’s new 65, 45 and 30 watt Nano II chargers are the first in the world to take advantage of GaN II technology. The entire lineup comes with a single USB-C port powered by the latest version of Anker’s own Power IQ 3.0 technology, that charges the iPhone up to 3 times faster than the 5W stock charger, and is compatible with Samsung Super Fast Charging.

The 65W Nano II charger is the same size as the 30W Atom PD 1 but more than twice as powerful. It can charge most smartphones, tablets, or any USB-C Laptops. It’s great for those needing to charge an entire arsenal of electronics during a business trip.

For those looking to travel light, the 30W charger is as small as a 5W stock charger, but can handle a Nintendo Switch or even the latest Macbook Air.

The 45W charger is slightly larger than the 30W. The  extra 15 watts are enough to keep chromebooks and other mid-sized notebooks charged.

Additionally, both the 45W and 65W options feature foldable plugs for maximum compatibility.

GaN II TechnologyGaN technology is the breakthrough that allows Anker to make powerful fast chargers in a smaller form factor. As opposed to silicon, which is typically used in most chargers, GaN provides a more efficient way to disperse heat, allowing chargers to safely operate at faster speeds.

“We are delighted that the InnoSwitch 4 is being used in Anker’s Nano II chargers,” said Balu Balakrishnan, CEO, Power Integrations. “The integration of our InnoSwitch 4 chipset improves the efficiency of the Nano II and permits a highly compact and attractive form factor.”

GaN II is a breakthrough for charging because it transmits energy more efficiently and operates at twice the frequency of the first generation of GaN. Combined with Anker’s patented stacking technology, GaN II is why the Nano II series can safely charge devices at speeds of up to 65 watts, while maintaining a form factor no larger than a standard iPhone charging brick.

While it is technically possible to create a charger faster than 30 watts in a smaller form factor without GaN II, Anker decided to wait for GaN II to ensure the Nano II series was not forced to either throttle its charging speeds and risk overheating.

The pricing and availability of Anker Nano II charger series in the UK, DE and other EU markets will be announced at a later date.