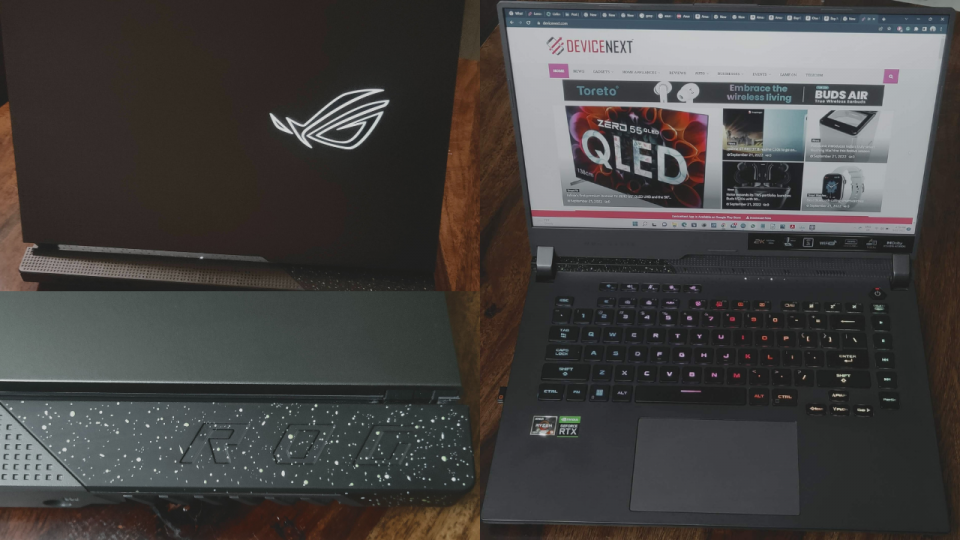 Asus ROG – Republic of Gamers – series of laptops have created their niche of being one of the most powerful and versatile gaming laptops around. And, now with the ROG Strix series, Asus has only upped the ante. Boasting an AMD Ryzen 9 6900HX CPU, coupled with a discrete Nvidia RTX 3070 Ti GPU, 16 GB of DDR5 RAM and a 15.6” WQHD high graphic-fidelity display – the Asus ROG Strix G15 G513RW laptop is an out-and-out performance gaming machine. Complementing the high-end specs is the eye-catching design that will get some people’s gasps as you set up this laptop for a gaming tournament or to showcase your creative work to a client. However, there’s a small practical usage catch, not with the laptop but with its power adapter, which we will discuss later as we delve deeper into detailing the laptop’s specs and features.

Going with a gamer’s personality the ROG Strix has a backlit ROG logo and a dot-matrix pattern on the aluminum lid which gives the laptop a distinct look. Adding vibrancy to the design is the uniquely colored armor cap that has a paint-speckled design and the RGB LED light strip that runs across the lower front and sides. The rubber footings give a sporty look and provide great stability when you repeatedly hit WASD keys during a game. The vibrant design aesthetics is continued as you lift the display lid to reveal the per-key RGB backlit keyboard, which is fully customizable. The near bezel-less display screen of 15.6 inches compromises with no space left for a webcam. Thankfully, a clip-on full HD external webcam is provided in the package by Asus.

The keyboard is ergonomic and the keys have an optimal travel distance of 2.0mm providing comfort and ensuring correct key presses. The backlit keys are customizable as per users’ preferences through Aura SYNC support. It has dedicated hotkeys for controlling functions like volume, operating modes, and Armoury Crate, and it is placed isolated on top to avoid any wrong key press. The large touchpad is smooth and gives precise navigation. However, this being a gaming laptop the slightly heavier weight of almost 2.3 kgs plus the weight of power adapter should be ignored.

The review unit (G15 G513RW) we received came equipped with the powerful combination of AMD Ryzen 9 6900HX octa-core 16 threads CPU and Nvidia RTX 3070 Ti GPU. This CPU+GPU coupling makes the Strix G15 laptop a highly capable machine to handle intensive gaming and creative graphics workloads. It has 16GB Dual Channel DDR5 RAM and a 1TB PCIe 4.0 SSD along with an additional M.2 slot for storage expansion up to 2 TB. The display screen is anti-glare 2560×1440 px having a refresh rate of 165 Hz and brightness of 300 nits.

Catering to the peripherals and accessories requirements of gamers, ROG Strix G15 features plenty of connectivity ports. The laptop has two USB 3.2 Type-C ports at the rear, and one of these ports supports 100W PD fast charge along with DisplayPort 1.4. This display port is connected directly to the discrete graphics card for delivering unmatched viewing performance on an external monitor. The rear side also has an HDMI and an RJ45 LAN port. While the left side has two USB 3.2 Gen 1 ports and an audio jack. The right side doesn’t have any ports, but plenty of slits for heat dissipation. It supports WiFi 6E that future-proofs the connectivity requirements, while the Dolby ATMOS support delivers a solid audio experience. For virtual meetings, audio recording, or while game streaming the ROG Two-Way AI Noise Cancelling is a useful feature that removes noise from both the device’s input as well as from the incoming feed.

It features a 90Whr battery that can deliver up to 6-8 hours of ideal usage time. However, adding to the laptop’s weight is the brick-sized 280W power adapter that comes with a 16A plug. So, if you’re playing a game at a cafe or presenting your creative work at a client’s place, and you run out of battery then you’ll have to scout for a 16A socket to juice up your laptop. Maybe, this was the one-off case as we received a review unit, while the mainstream laptops on sale might be shipping with the regular 6A power plugs.

With discrete GPUs, the power consumption soars high, and this is the area where Asus engineers have shown their ingenuity with a Multiplexer (MUX) Switch, which allows a user to manually engage or disengage the integrated graphics card. The MUX alters the connection between the GPU and the display screen to directly deliver the frames from GPU to the display, thereby increasing performance, lowering latency, and enhancing the visual gaming experience.

Using the laptop for over a month, one thing that stood out besides its performance was the laptop’s ability to be quiet. Be it a video render or while playing a game when the RTX 3070 is triggered the laptop doesn’t make much sound even when the internal fans are running at full speed at Performance Mode for cooling the GPU and CPU. Though most of the time the discrete graphics remain latent and quiet and let the integrated Radeon graphics of AMD Ryzen 9 6900HX processor do the regular work. It whirs into action as soon as a graphic-intensive application such as a game or video editing job is initiated, and yet manages to work quietly. While playing games such as Call of Duty: Warzone or Counter-Strike, the game experience was excellent with no visible frame drops. We also edited and rendered videos at full HD resolution, and the Nvidia RTX 3070 Ti got the work done in about 5 minutes, which is much faster when compared to the laptop we had used earlier having integrated graphics.

The low noise levels and efficient cooling can be attributed to the liquid metal compound from Thermal Grizzly, which allows 14x better thermal conductivity for efficient heat transfer from CPU to cooling module. Its intelligent cooling design with four fan outlets maximizes the airflow to keep the device cool even when the CPU and the GPU are in full swing.

The Strix G15 is listed at Amazon and Flipkart with a price tag starting at around INR 1,95,000. The cost justifies the Asus ROG Strix G15’s powerful performance and intriguing features that deliver an optimal gaming experience and can seamlessly cater to any high-graphics intensive creative work. If you’re a gamer and in the creative work field, then this laptop will serve you well in both worlds with ease. Strix G15’s sporty styling, powerful performance, and top-end specs will ensure that ROG Strix G15 keeps you competitive for the long foreseeable future.