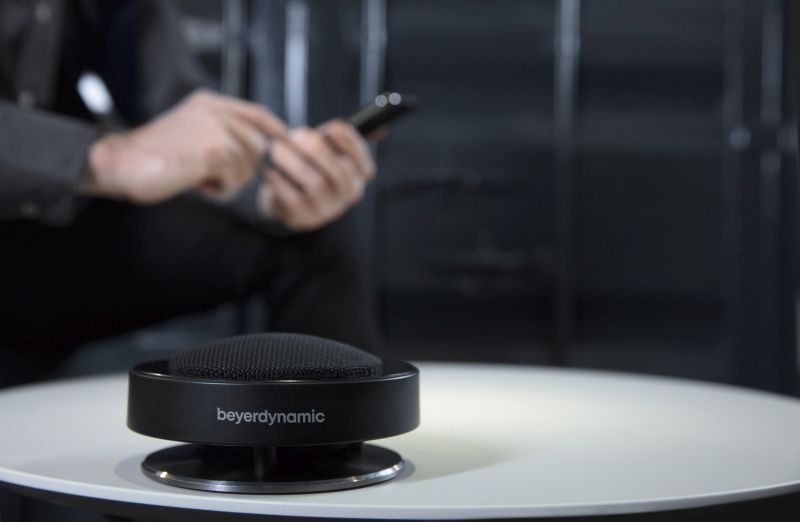 beyerdynamic PHONUM turns every space into a conference room. The innovative, compact wireless Bluetooth speakerphone connects to smartphones and laptops wirelessly, providing bidirectional speech transmission in outstanding sound quality. At the heart of this system is the GECKO 360° technology comprised of the three components FUNCTION, VOICE, SOUND. The highlight is GECKO 360° FUNCTION: with its three modes Fix, Follow and 360° the microphones’ directivity can be adjusted to point in one fixed direction, dynamically follow the speakers or cover the whole room. GECKO 360° SOUND takes care of the playback and consists of a downfire loudspeaker evenly distributing incoming sound into the room. GECKO 360° VOICE consists of three premium microphones to pick up the voices in the room. With FUNCTION, VOICE and SOUND, the speakerphone PHONUM ensures perfect clarity of voices for all participants.

Spontaneous, flexible, agile – technology for modern meetings Companies of any size put strong emphasis on communication. Old- fashioned conferencing systems are often only used as a compromise – they are not flexible enough and unsatisfying sound-wise. Wireless Bluetooth speakerphone PHONUM leaves the beaten paths of conferencing culture as beyerdynamic understands today’s requirements. The compact system runs on battery, can easily be carried, connects to smartphones and laptops via Bluetooth® and provides excellent sound. It opens a whole new world of communication: if in huddle rooms or hotel rooms, in a traditional conference room or stuck in traffic in a car-on- demand – PHONUM connects teams globally.

PHONUM features specially arranged 360° microphones with three configuration modes Fix, Follow and 360° in order to achieve outstanding speech transmission. This technology uses three high-quality microphones to enable voice tracking that dynamically optimizes pick up direction. In Fix mode, PHONUM catches sound from one specific direction, while in Follow mode it automatically tracks the direction of the speaker, and in 360° mode it covers the whole room. This ensures a clear transmission of the words in perfect intelligibility. GECKO 360° also effectively suppresses background noise and interfering echoes, helping to resolve acoustical problems of the room. The applicable GECKO 360° FUNCTION can be chosen and set via an elegant touch panel.

Three microphones for perfect speech transmission: GECKO 360° VOICE Few companies can boast as much experience in microphone development as beyerdynamic. In recording studios, on stages, at movie and theatre productions – microphones from Heilbronn can be found wherever sound is paramount. The same is true of PHONUM: the three microphones are arranged to work together perfectly, picking up voices in the room in immaculate quality. This ensures perfect understanding – the most important base for quick and good decision-making.

While its three microphones with the innovative Fix & Follow technology pick up and transmit voices, an exceptional downfire sound system accomplishes the immaculate reproduction of incoming speech. beyerdynamic engineers developed this unique technology that uses a reflector plate on the bottom to disperse the sound evenly and clearly into the room. Everybody present can easily understand everything that is said and can focus their energy on the actual contents, resulting in more relaxed and creative conferences. The high-quality downfire loudspeaker can also be employed to play back music or movies.

The carry-on meeting room beyerdynamic PHONUM is wireless, compact and mobile – this renders the system flexible and always ready. There is no complex wiring to be installed in a room like there often is with traditional conferencing systems. PHONUM can just be taken to a room and activated – swift, spontaneous and mobile. Apart from its application as conferencing system in huddle rooms for small teams, PHONUM is also the perfect solution for travellers and home office workers who want to enjoy high-quality hands-free speech transmission. The battery lasts for up to 12 hours, sufficient for most applications. A USB connection works as a power supply and charges PHONUM.

The innovative wireless Bluetooth speakerphone beyerdynamic PHONUM with GECKO 360° downfire sound system is sold via Headphonezone.in for a recommended retails price of Rs.24,999 including VAT.