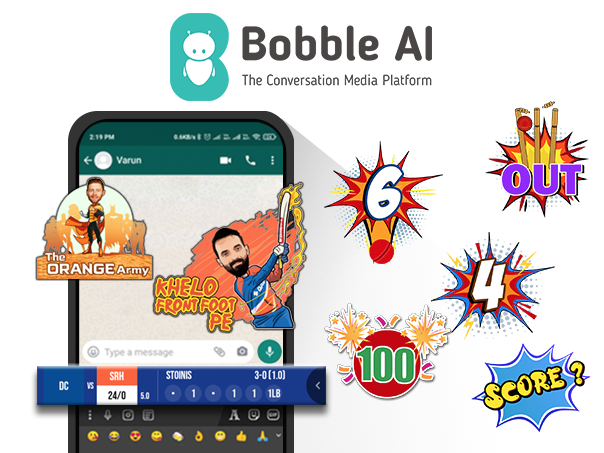 Indian Premier League, India’s favorite cricket tournament has finally kick-started and the cricket enthusiasts can’t keep calm. With the work from home becoming the new normal, the consumers are now juggling between zoom meetings to the kitchen duties, and the excitement of not missing a match has also added to the woes. Sensing this enthusiasm Bobble AI, the world’s first conversation media platform has introduced the first-ever ‘IPL Score Bar’.

The flagship product Bobble Indic Keyboard has launched this one of a kind amalgamation between conversations and IPL Score Bar’ allowing users to watch the live IPL score while conversing. It is placed right above the Emoji Bar and displays live scores, details about teams, players, and all that we see on our TV screens, while users chat and share.

The score bar gets activated 30 minutes before the match and stays active for 30 minutes after the game.

Commenting on the newly introduced feature, Ankit Prasad, Founder, and CEO, Bobble AI said, “Cricket is one of the most celebrated sports in India. The enthusiasm, conversations, and expressiveness of our users are heightened while watching an IPL match, especially when we know that people are now looking beyond OTT for their entertainment. With users generating more than 120 sessions on an average on mobile keyboards, we decided to take the lead through our cutting-edge AI and introduced an IPL Bar within the keyboard. This will enable the users to remain updated while having conversations with their friends and family members”.

Through a share icon on the IPL score bar, users can share live scores with their friends, family, and colleagues during their virtual meetings. In addition to this, Bobble AI also has launched uber-cool conversational stickers and GIFs. During the match, users can support their favorite teams and players, talk about scores via single tap stickers and ecstatic GIFs.

Bobble AI has also included a section “IPL Themes – Live Scores & Updates” with specially curated themes of different teams to change the look and feel of the keyboard, creating an immersive experience for the user.

WACOM ONE launched in India with a complete ‘Digital Starter Kit’