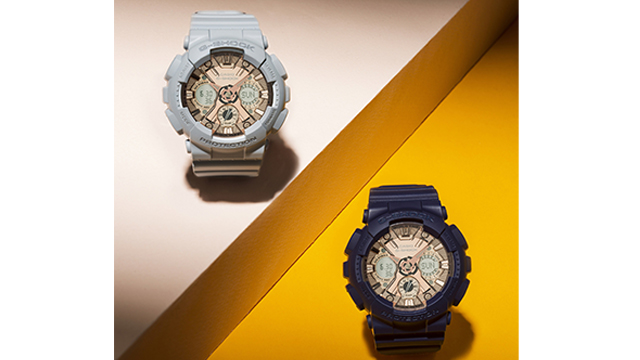 Today, Casio G-SHOCK unveils the latest S Series collection of women’s fitness and lifestyle watches, arriving with pink and gold accents just in time for spring. Inspired by the pastel colorways of the season, the four new timepieces offer a new take on two of the most popular S Series silhouettes, the GMAS120 and GMAS130.

Made for the modern, active woman, the new collection comes in updated case and band colors that are highlighted by the metallic accents of the watch faces. Boasting colors such as navy (GMAS120MF-2A2), grey (GMAS120MF-8A), black (GMAS130PA-1A), and pastel pink (GMAS130PA-4A), G-SHOCK’s new models combine a feminine look with the brand’s ethos of Absolute Toughness.

The GMAS130 models come equipped with G-SHOCK’s fitness-inspired technology such as step tracking capabilities, an automatic step counter display, which provides an achievement indicator percentage, an activity graph of the last five hours, and a non-active alert, so users can easily assess their progress throughout the day.

The GMAS120 lifestyle models also boast top-line features including magnetic resistance and a speed indicator. All of the models come equipped with G-SHOCK technology that includes features such as:

200M water resistance and shock resistance
Auto LED light
4 Daily alarms
1/100th Sec. Stopwatch
Countdown Timer
The GMAS120MF-2A2, GMAS120MF-8A, GMAS130PA-1A, and GMAS130PA-4A, will retail for $130 each and will be available for purchase at G-SHOCK retailers including Macy’s, the G-SHOCK Soho Store, and gshock.com.

This Global Running Day, Here Are Top Garmin GPS Smartwatches For All The Runners Out There