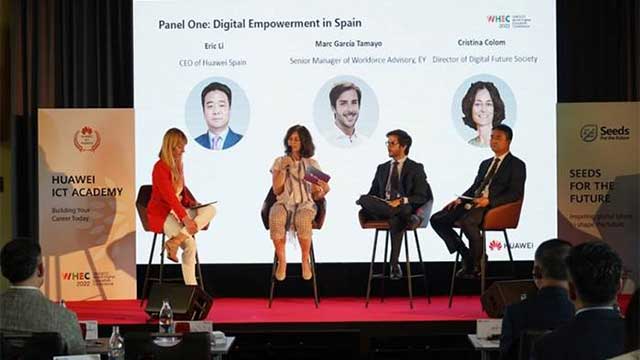 Huawei hosted the Digital Talent Summit yesterday in Barcelona as part of the UNESCO World Higher Education Conference. The summit was attended in person or virtually by more than 80 experts from the education sector representing government, academia, industry, and UNESCO. The guests discussed how technology can play a role reinventing higher education for a sustainable future. Ten students from Huawei’s Seeds for the Future program also joined the summit.

UNESCO Assistant Director-General for Education Stefania Giannini and Huawei’s Board Director & Senior Vice President Vincent Peng kicked off the event describing the increasingly important role technology is playing in innovation and education. Giannini said, “We now have to go the extra mile, to bridge the global digital divide that left many behind and to integrate ICT-based solutions into higher education systems or programs. This is key for more than just graduate employability. Digital technology can also contribute to more open, flexible, and connected higher education ecosystems.”

Peng, in turn, called for universities, corporations, and governments to work together for a sustainable and inclusive future. He said, “Digital technology has the potential to rebalance the world’s education resources. We should leverage digital technology to build a more collaborative, open, and vibrant education system.”

“We have partnered with almost 2,000 universities around the world to build Huawei ICT Academies, with a target of training more than 1 million ICT professionals and experts by 2024,” he said. “We hope to improve digital literacy of all through these efforts, supporting sustainable growth of the society and industries.”

The summit was celebrated with the launch of Seeds for the Future scholarship and a signing ceremony of Memorandum of Understandings with 11 ICT Academies in Europe, Asia Pacific, and Africa.

A number of leaders from the education sector also spoke, including Markus González Beilfuss, undersecretary for Universities of the Government of Spain; Ivica Šušak, State Secretary, Ministry of Science and Education of Republic of Croatia; Qin Changwei, Secretary-General, National Commission of the People’s Republic of China for UNESCO; and Li Ming, Director of UNESCO-ICHEI.

At the event, Huawei and Ernst & Young (EY) also released their first whitepaper on the future of digital skills in Spain. This white paper is one of four white papers Huawei is publishing over the coming months. The next two will address talent development in South Africa and China.

The education sector is changing rapidly as technologies like big data, cloud, augmented reality, virtual reality, and artificial intelligence rapidly make hybrid learning more accessible for all. Huawei’s new whitepaper on education in Spain though indicated that only 13% of companies use those cutting-edge technologies, and the companies that do use them do so primarily for strategic decision-making.

5 Phone Safety Tips to Keep Your Phone in Optimal Condition

Fueling the next generation of innovation with Bosch DNA