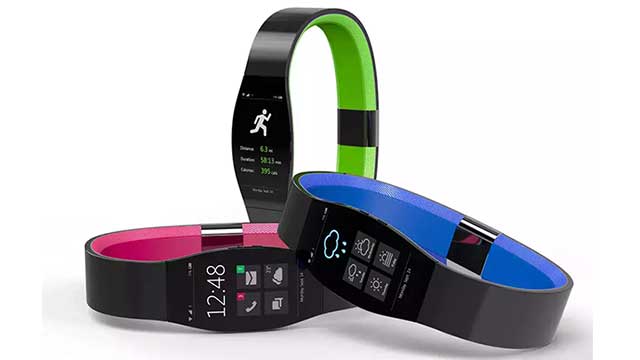 The India wearables market shipped 13.9 million units in 1Q22,  up 20.1% YoY (year-over-year) according to the recent data from the International Data Corporation’s (IDC) India Monthly Wearable Device Tracker. This growth can be attributed to new launches, discounts across channels, and aggressive marketing by brands. The ASP of the overall category declined 17.1% YoY primarily due to a stronger decline in the ASP of watches.

Watches continued to be the fastest-growing category shipping 3.7 million units with a growth of 173.0% YoY in 1Q22 (Jan-Mar). Basic watches accounted for 95.1% of the overall watch category shipments. Aggressive competition at entry-level price points helped the basic watches grow 202.1% YoY, whereas the smartwatch shipments declined 4.2% annually. Furthermore, the ASP of the watches declined 41.5% YoY to reach $50.3 in 1Q22 compared to $86.0 in the same quarter last year. On the other hand, Wrist bands continued to decline annually for the 9th consecutive quarter. Overall wristwear (which includes watches and wrist bands) grew 87.5% yearly in 1Q22, with a total shipment of 4.0 million units.

“Aggressive discounts, new features, and a strong push from brands and channel partners are encouraging consumers to upgrade and spend more on wearable watches,” says Anisha Dumbre, Senior Market Analyst, Client Devices, IDC India.  “While dependence on devices like TWS and wearable watches is increasing, supply remains a concern for the industry. Intense competition in the sub $50 category is pushing all brands to offer competitive offerings in terms of pricing, features, and device design,” adds Dumbre.

1Q22 Top 5 Wearable Company Highlights
Imagine Marketing (BoAt) led the quarter with a 22.9% market share in 1Q22 growing 5.2% YoY. Its broad portfolio of earwear devices and aggressive push in the wearable watch category as value-for-money devices helped the company’s growth in the quarter.

Nexxbase (Noise) finished the quarter in second place with a 10.9% market share. The company’s constant focus on design, features, price point, quality, and expansion in channels has helped the brand grow by 150.1% YoY in 1Q22. Multiple product launches at competitive price points brought down the ASP of the brand’s portfolio of watches by 31.3% to reach $31.5 and earwear devices to $16.6, declining 37.2% from the same quarter last year.

OnePlus finished third but was the only player in the top five to register a decline of 35.8% YoY. With 94.5% of its portfolio present in the earwear category, along with its strong distribution across online and offline channels has helped the brand to preserve a place in the wearable market.

Fire – Boltt‘s focus on only watches complemented with back-to-back launches helped the brand to emerge fourth in the overall wearable category with a 6.6% market share. The company managed to gain traction in the watch market due to aggressive marketing, strong promotions, and competitive pricing. Their portfolio of Ninja series watches accounted for more than 55% of the company’s portfolio.

Shipments from Realme grew 26.6% YoY in 1Q22. Major volumes in the first quarter were driven by Realme Buds Wireless 2 Neo accounting for 43% of the overall company shipments. A strong push online and offline complimented the company’s growth. 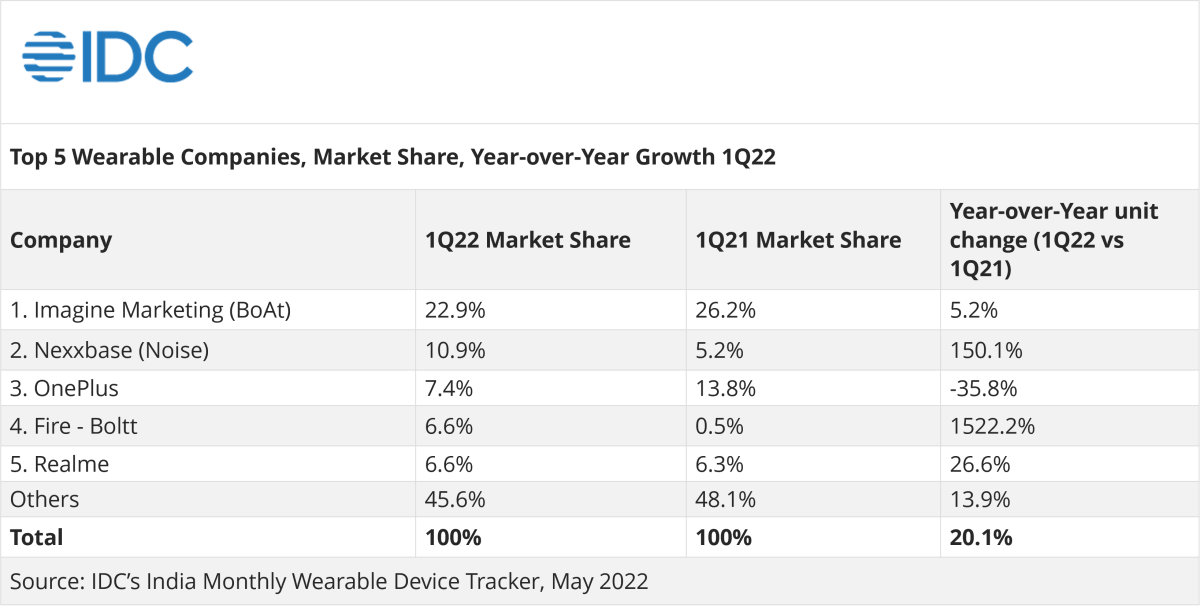 “The outlook for 2022 remains strong as wearables will try to attract users in Tier 2 and Tier 3 cities. The healthy growth is attracting newer players to the market, as brands in the other devices and accessory space are entering,” says Upasana Joshi, Research Manager, IDC India. With the continuing push from the brands, 2Q22 (Apr-Jun) is expected to see healthy YoY growth. The aggressive offers, sales, and marketing around the festive season in 2H22 (Jul-Dec) are expected to continue this growth momentum through the year for the wearable device categories.

She further adds, “With the PLI scheme for wearables announced by the government, key players in the ecosystem have begun foraying into local manufacturing of these devices and launching ‘Made in India’ products, possibly leading to further lowering of the ASPs.”

Earwear and Watches Leads to a Record Quarter for Wearables in India with 11.8 million units shipped in 3Q20, Says IDC India