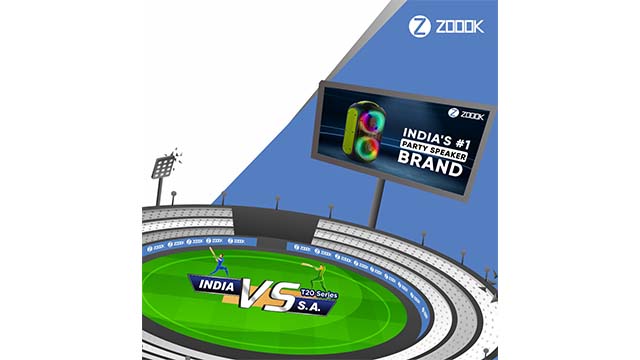 French Lifestyle brand ZOOOK, which has become a household name across India over the past decade with its wide array of audio and consumer technology products, has now entered the cricketing arena. The company has joined the celebrations of the India Vs South Africa T20I Series by inking a deal for on ground, including giant board and perimeter branding during the different matches, including the opener at Arun Jaitley Stadium in New Delhi on Thursday.

“Team India currently ranks No. 1 in the shortest format of the game and so does ZOOOK when it comes to innovative technology and party speakers. Team ZOOOK will be rooting for the Men in Blue, who are just one win away from most consecutive victories in T20I and moreover, our love for the game has compelled us to expand our marketing focus around the same. Earlier we got associated for the Road Safety Series while this time we are cheering Team India from inside the ground. Hope we get to see good cricket all around,” said Achin Gupta, Country Head-India, ZOOOK.

Notably, the No. 1 party speaker brand in the country had nearly a year ago collaborated with India Legends team, which comprised the likes of Sachin Tendulkar, Yuvraj Singh, Yusuf Pathan, Irfan Pathan and Mohammad Kaif among others, for the second edition of the Road Safety World Series.

The ongoing South Africa tour to India comes as an adrenaline rush for the cricket lovers in the country, for while Men in Blue are in their best form in the T20I format, they had last suffered a drubbing against Proteas when they had toured South Africa.

Garmin Announces the vívosmart 5 in India