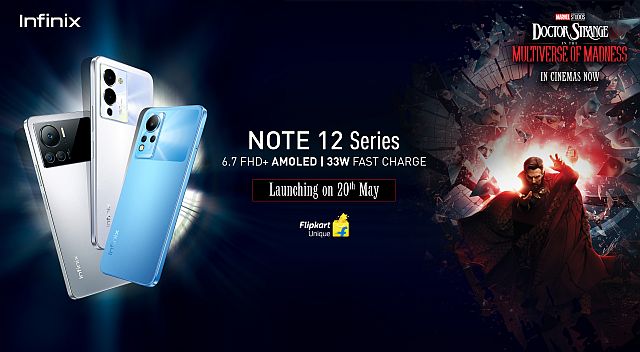 Riding the waves of innovation and offering unique experiences to its consumers through its devices, Infinix, the premium smartphone brand from TRANSSION group has teamed up with Marvel Studios for the first time ahead of the upcoming ‘Doctor Strange in the Multiverse of Madness’ release on May 6, 2022. The association will lead to the brand’s reveal of its much-awaited Note 12 series- Note 12 & Note 12 Turbo, all set to launch this month.

Infinix’s latest entrant from its premium and powerful gaming smartphone series, the Note 12 Series will come with an AMOLED display, which makes it a great entertainment device in this segment. The Note Series will come with widevine L1 support which will allow seamless streaming of HD content.

Operating on the latest Android 12, Note 12 Series promises its users lag-free content consumption. The device will be launched in multiple(colour/memory) variants, signifying the multiple avatars of the Marvel Comics character, Doctor Strange from the forthcoming American superhero flick. Infinix customers will also get access to Doctor Strange in the Multiverse of Madness’ merchandises.

Commenting on this association, Mr. Anish Kapoor, CEO – Infinix India, said, “We are excited to unveil the Note 12 Series in partnership with Marvel Studios for their upcoming movie “Doctor Strange in the Multiverse of Madness” which is building up to be one of the biggest movies of the year. Like Doctor Strange will be featured in multiple avatars similarly, the NOTE 12 Series will also be coming in multiple variants. Infinix NOTE series has already set benchmarks when it comes to providing the most powerful gaming experience. With the launch of the NOTE 12 Series, our aim is to offer the best in class products for our users and enhancing them by introducing FIST (First in Segment Technology) features. The Note 12 Series come with the best in segment features like the widevine L1 screen support, AMOLED display that ensures the best colour reproduction on the screen for our consumers watching high resolution videos.

‘Doctor Strange in the Multiverse of Madness’ is intended to be the sequel to Doctor Strange (2016) and the 28th film of the Marvel Cinematic Universe (MCU). Directed by Sam Raimi, the film stars Benedict Cumberbatch as Stephen Strange, alongside Elizabeth Olsen, Chiwetel Ejiofor, Benedict Wong, Xochitl Gomez, Michael Stuhlbarg, and Rachel McAdams. In the film, Strange and his allies travel into the multiverse to face a mysterious new adversary.

Stuffcool Earl 4-in-1 Type-C Hub Review: Must Have For MacBook Users

Winmate Inc: Spearheading Automation from Asia to the World