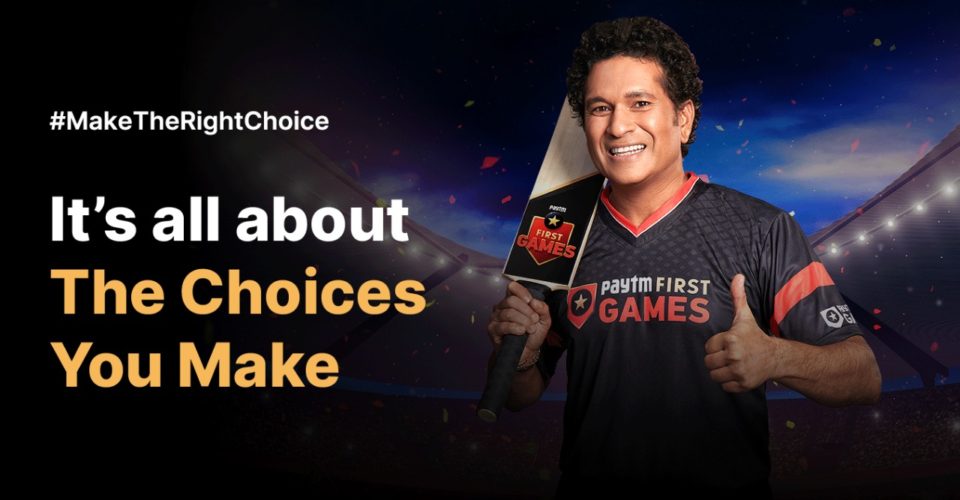 India’s homegrown digital financial service platform Paytm announced that its subsidiary Paytm First Games (PFG) has launched its new emotionally appealing marketing campaign with the Master Blaster Sachin Tendulkar. Based on the incredible journey of the country’s finest sporting legend, the ‘Make the Right Choice’ campaign aspires to encourage millions of fellow citizens to follow their dreams. The campaign also showcases the company’s vision of promoting fantasy sports in the country and inspire budding players to play the skill and strategy-based games on PFG.

Launched during the ongoing IPL 2020, the first film of the campaign depicts an anecdote from the life of the master blaster. The film starts with a vivid shot of a cricket match being played on a college ground.

A coach walks up to a boy in the crowd and asks him “Tera match khatam ho gaya…?” The boy informs that he has skipped his practice to cheer for the team, and gets slapped by the trainer who sternly opines, “Life mein khelna hai ya cheer karna hai?”

Perplexed, the boy spends the entire night wondering if he should switch to a new coach. However, he visits the same coach the other day and firmly replies  “…life mein khelna hai…”

In the next shot, the coach is seen teaching the trademark high-elbow straight drive to the boy and is followed by the scene of Sachin playing the same shot in an ODI in real footage.

In an interesting sequence, this real-life event is depicted as a photograph with Sachin standing next to it. Reminiscing the entire episode, he says ‘It’s all about the choices you make.’ The video concludes with the Paytm First Games’ app interface depicting fantasy sports and the logo of the company. These films will be released across broadcast, online and mobile channels over the next few weeks.

Sudhanshu Gupta, COO – Paytm First Games said, “Sachin is a true legend and an inspiration for millions across our country. With this brand film, we have shared one of the life-changing moments of Sachin’s life wherein he was faced with a difficult choice. We are happy to see that our entire campaign has struck a chord with everyone. It is our humble endeavour to inspire people to make the right choices in life irrespective of how difficult they might seem. The theme fits well with our fantasy sports game as well which requires users to have in-depth know-how and research of the game and players and make strategic choices while making their team.”

Recently, Paytm First Games announced that it has set aside Rs 300 crore for investing in growing the market for fantasy sports and other online gaming events during this financial year. It confirmed that over the next six months, over 200 live events would be featured on the platform, including international and domestic cricket tournaments, soccer leagues and more.