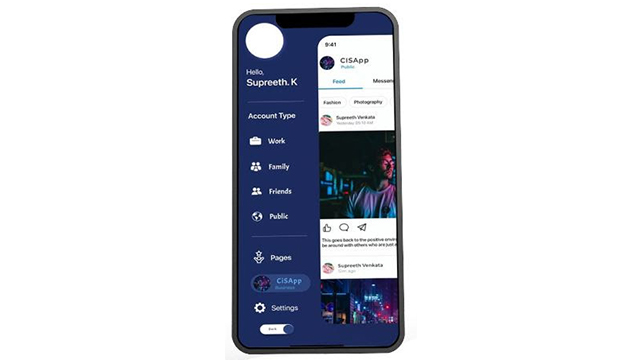 Imagine an end-to-end encrypted, non-tracked social media platform where you keep all your data and segregate friends, family, public and professional contacts with different profiles with a single blockchain login. Imagine a world without agenda-driven censorship, profit-driven privacy violations, and the widespread usage of phoney identities (bots) for the purpose of selling sex or deceiving users on social media. Consider CiSApp, the world’s first social networking platform.

CiSApp is poised to be India’s premier social network. CiSApp has successfully raised $174000 (INR 1.3 Cr) from Seed Round Capital Inc, a Houston-based investment firm led by Brad Jenkins and Austin Hill; and Micro Ventures out of Austin, TX. Through it’s use of blockchain, CiSApp can ensure genuine users rather than bots, duplicate, or fake accounts. After Google Adwords, CiSApp is one of the most complex product developed on the flutter framework. CiSApp recognizes that content creators are the ones who drive platform engagement, and It is a platform intended to pay genuine content creators.

“We’ve raised around $200,000 to date, and looking to release our beta version in a month. Once we hit stage I of the release, we plan raise up to $2M in the next 12 months to continue scaling up CiSApp. Our goal is simple-build a platform for users, not their data, that will alter the way we interact on the internet. Our target is to hit 1M+ users by Q2’2021 and will open the reward-system in the platform once we hit that mark,” quote by Bhargav Varma, Co-founder, CiSApp.

CiSApp’s business is fundamentally different than existing platforms. is notable in that it does not rely on advertising or the collecting and selling of user data, as do the big companies. CiSApp provide a platform to bridge the gap between companies and promoters.

Content creators, influencers, earlier investors, have access to CiSApp. Now, It’s time for all internet users to get an access to CiSApp from this November, enabling them to join in creating technology for a better tomorrow, a next-generation social media platform.