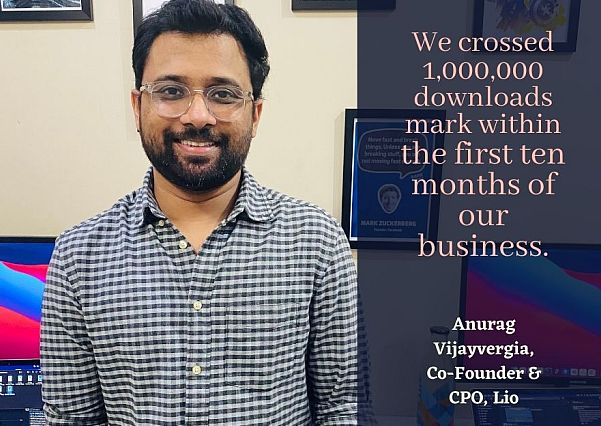 Lio is a SaaS (software as a service) company and optimized its mobile-first approach for tabulating, calculating and sharing data on your phones. With increased adoption of mobiles as primary business platforms and usage of digital payments, the company believes that small businesses are digitizing at a rapid pace. Our Editor in Chief, Jayanta Ghosh interacted with Anurag Vijayvergia, Co-Founder & CPO, Lio about  road map, expansion strategy, and nearly everything about it from the ground up.

When was Lio incepted?

Lio, a mobile application available for iOS and Android, was launched in November 2020 by twin brothers – Anupam Vijayvergia and Anurag Vijayvergia. They launched this intuitive yet straightforward app to help its users effectively manage their business and personal data on their mobile phones. A simple tabulation app offered an easy alternative to Google Excel, the product transformed into a feature-rich library of pre-defined templates.

How much funds have you raised so far? Please share the details of the investors.

The company recently closed a seed round funding of $5 million by Sequoia Capital and Lightspeed Venture Partners. Besides this, Lio raised an angel round of capital in March 2021 from prominent names in the industry, including Anupam Mittal, Aakrit Vaish, Gaurav Munjal, Ashish Hemrajani, Haresh Chawla, and Kunal Bahl, among others.

What is the USP of the company?

Lio’s USP lies in its integrated, SaaS-based, and mobile-first approach that enables the users to organize and access their business with personal data on the go.

With the increased adoption of mobiles and usage of digital payments, Lio offers an innovative app that helps users with a variety of tabulation, calculation, and organizing needs. The product offers many features, from creating customer or stock data tables for small businesses to organizing to-do lists and wedding registries. We are proud to be a first-of-its-kind platform for users to leverage over 60+ data templates created by other customers in their interest-based communities. Currently, the app is available in ten Indian languages, which is an added advantage. In July 2021, the application was also launched in Indonesia in its native language, and it has witnessed a strong adoption.

Considering the company is already doing so well within ten months of its inception, what are your plans for expansion?

Lio has grown rapidly ever since it was launched last year. We crossed 1,000,000 downloads mark within the first ten months of our business. Besides this, our user base also spans a broad spectrum from home business owners and small to medium companies to various individuals, including farmers, salespersons, taxi drivers, students, and homemakers. In the coming years, we further plan to grow the user base in India while also expanding in similar Android-first markets.

What is your basic marketing strategy to ensure customer satisfaction?

As of now, we are trying to reach our existing and potential customers with a mix of informational content related to the ability to use spreadsheets on the phone, manage their business on mobiles, financial planning, and other industry-specific use cases.We are also enabling entrepreneurship focused communities with help content that is relevant to our users.

Where do you see yourself as a company in the next five years?

In the next five years, we want to be one of the leading mobile spreadsheet apps. We will further make it an easy-to-use app to allow even someone who isn’t that tech-savvy to organize their data and manage it efficiently.