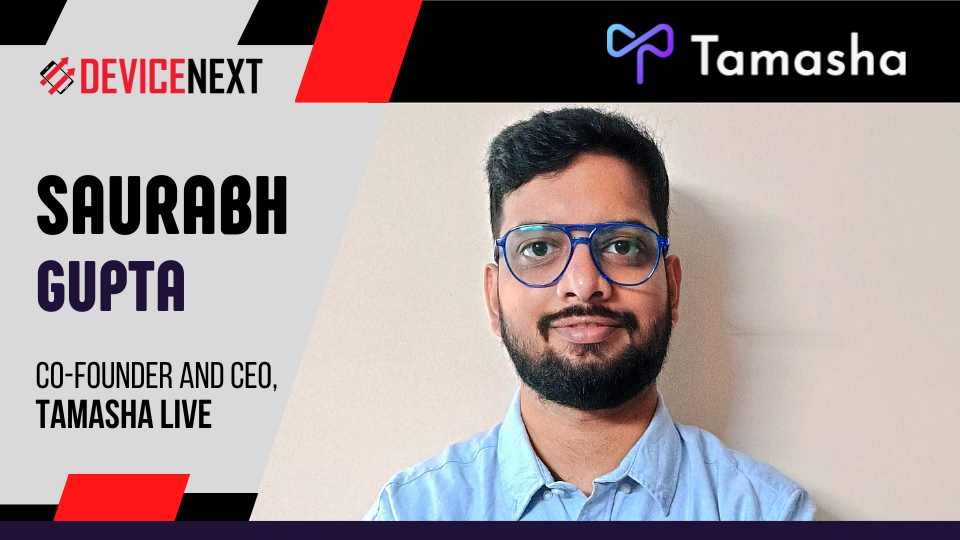 The gaming landscape has evolved significantly in the last couple of years, which not only saw the rise of mobile gaming but real-time live community gaming as well. Tamasha Live, is one such live community gaming platform that serves as a lucrative avenue for micro and nano influencers from Tier 2 and 3 cities to host live social games among their micro-communities and instantly monetize their engagement. The gaming platform – Tamasha Live – was conceptualized by Saurabh Gupta and Siddharth Swarnkar in July 2020, as they realized the potential of making real money where people can play in social groups led by local influencers. We had the opportunity to interact with Saurabh Gupta, Co-Founder and CEO of Tamasha Live, who shared insights on the gaming landscape and talked about the company’s market strategies.

Here’s the excerpt from the interview.

How did you come up with the idea of Tamasha Live? Could you share your journey highlights of Tamasha Live, from inception to your recent foray into Google Play Store?

Tamasha was founded in July 2020 and first version was released in Nov 2020. The concept came from the fact that gaming communities and their owners didn’t have a platform to play, engage and earn. They have to use multiple products to engage among each other. Money is transferred using payment platforms, engagement is done on WhatsApp or zoom and there is no way to discover new people. Tamasha is a gaming platform which is social 2.0 meaning there is a unique combination of community, engagement and transaction layer which blends naturally among each other.

Why a specific focus on influencers and users from Tier-II and Tier-III segments? What is the potential market opportunity?

Are you planning to go vernacular with your platform as well for local micro-gaming communities?

Yes, currently we have the platform in both Hindi and English. Soon we will be available in more languages as it’s important to connect with the audience and be relatable.

Tell us about the growth you have witnessed, both in terms of revenue as well as user adoption.

Our numbers are healthy and are growing at a very fast pace. Total transactions on the platform have grown 50x since May last year. We have 100K+ monthly active users and 3000+ creators monetizing every month.

Wordle, is a very simple game, but it became a phenomenon. How can your platform be the game-changer for Indian game developers?

The developer ecosystem is one of the most critical parts of the Tamasha platform. These developers release their games on Tamasha, and these games are played by the gaming communities. Developers earn commission out of the pool that the users are creating on the game. Tamasha thus helps developers to distribute their games to a wider audience and make them viral through influencers on the platform. It helps them to monetize their games and make their game social without building social tools themselves.

How are the creators, influencers, and users benefitting from the platform? In return, how does Tamasha Live benefits from them? How can your platform be a game changer for Indian creators?

Creators are benefitting by focusing on engaging their audience and organizing games for the community without having to deal with payments, communication, and other logistic problems. Creators can also get access to the new set of users who are looking for these gaming communities to play. Creators are the true owners of the platform and we incentivize them instead of Google ads since they bring the users and engage with the users. Thus, Tamasha is providing a platform to build, grow, engage and earn from the followers of these creators. Platform benefits by cutting a small percentage of the value that is being generated from communities.

From your perspective, how big is the mobile gaming market in India?

The mobile gaming market in India has a lot of room in Real Money gaming for innovation in games format, as the space has been dominated by a few formats like Poker, Rummy, and Fantasy. We will also see a lot of real gaming companies adopting crypto and NFTs in their ecosystem. As more Indians turn to online gaming, the numbers, as per a KPMG report, are expected to rise to 510 million in 2022, up from 360 million in 2020. As far as revenues are concerned, the market is expected to grow at a compound annual growth rate of 21 percent to Rs 290 billion ($3.84 billion) in the next five years. The growth of gaming during the pandemic is evident by the fact that people craved connections that they were able to find while playing games. Moreover, gaming platforms are trying to build a gaming ecosystem as they aim at supporting creators and developers, who play a major role and expanding connections for users. Since internet data is available at an affordable rate, use of digital payments, low risk, and high reward possibility, many new users have started seeing it as an attractive option to earn money.

What are the challenges you are facing?

Though there has been an increase in the number of gamers in India, but there are some states which refuse to regulate online gaming in India. Every state in India, except Goa, Sikkim, and the Union Territory of Daman explicitly prohibits any sort of gambling, betting, or wagering on games of chance. Assam, Andhra Pradesh, Nagaland, Odisha, Tamil Nadu, and Telangana have placed restrictions on games of skill as well. Games based on skills are allowed in most parts of the country whereas a game of chance is treated as immoral and is prohibited in most parts of the country. Parents in India have a problem with online gaming since children have become addicted to online gaming. Many of the children spend six to eight hours a day on online gaming which affects their physical and mental health, and their academics.

What next for Tamasha Live?

With a focus on quality and customer satisfaction, Foxin is geared to expand its market position in India