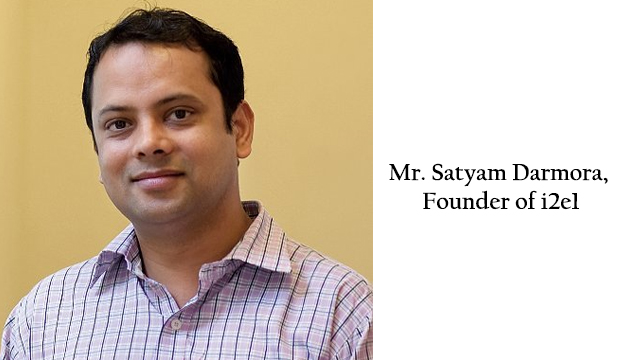 Founded in 2015, i2e1 was incubated in IIT Delhi by Satyam Darmora.  It is India’s first PM WANI compliant Wi-Fi company. They harness the power of cloud & software defined networks to provide Wi-Fi access to remote areas with ease and efficiency. Over the years industry veterans like Natraj Akella, Nishit Aggarwal, Maanas Dwivedi and Ashutosh Mishra have joined the team.  The company’s core offerings are Magic Box – a WANI ready cloud-based Wi-Fi management platform, Wi-Fi based retail analytics, and marketing solutions for offline merchants. In Nov 2017, the company raised 2nd round (Series A) funding of $3 million by Omidyar Network, Auxano Ventures and 3one4 capital.  Editor in Chief of DeviceNext, Jayanta Ghosh caught up with Mr. Satyam Darmora, Founder of i2e1 about  recently announced industry-first Public Data Office (PDO), and its vision to bolster the Government of India’s PM-WANI initiative.

Mr. Satyam brings a unique combination of development sector, technology, innovation and startups to i2e1. He has served on the board of many companies including BASIX- SubK, Labournet, Kinara, Sonata, Arohan and IntelleGrow amongst many others. Prior to that, he worked with American Express, managing new products and portfolio risk in various international markets including Japan, Hong Kong and Germany. There, he was awarded the prestigious Chairman’s & Award of Innovation; an award granted to the top 25 performers within American Express globally. He has very strong experience in the area of livelihood challenges in India and has served on various GOI appointed committees, including the National Skill Development Corporation (NSDC).

Your thoughts on India’s digitization journey till date

India has come a long way in its digitisation journey primarily riding on the mobile internet as the primary connectivity medium. Penetration of smartphones has thus led to multiple unicorns that provide services on top of a digitized platform.

While the mobile internet consumption is increasing in India, mobile internet is not sufficient and affordable to support future ways of accessing education, healthcare and financial services. It requires a high-speed fixed home internet. Sadly, India is severely underpenetrated creating a huge digital divide. Compared to China that has 92% coverage of high-speed home internet, India has only 7.2%. This only will enable the country to maximise the potential for its 1.3 billion population

What are the major roadblocks to powering the infra?

Infra led approach requires heavy investment and slower pace. While the Government has invested a lot on Bharatnet, lack of overlaying business models leads to inefficiencies and poor quality. Hence the need is to have unbundled architecture that can make sure the existing infra is utilized in the best possible way. This has been witnessed across industries like hospitality and mobility that such an approach leads to faster growth and better quality infra.

On Jan 23rd, 2021, i2e1 set up India’s first PDO under the PM WANI scheme. Since then more than 4 thousand PDOs have been launched. In a very short time, we have witnessed income increase for small retailers by 15-20%, while millions of people have got access to faster and cheaper internet.

i2e1’s affordable and customizable technology stack makes it possible to start a PDO with as less as INR 250 per month. We are also offering these services to all other interested parties like device manufacturers, other PDOAs, ISPs, etc. In a short time, we have partnered with more than 25 such organizations. Thus, we are confident of delivering 30 to 40% of the total market that will be created under the PM WANI initiative.

i2e1 has also been playing an important role in knowledge sharing with ecosystem players, who have shown interest in joining hands with PM WANI. We have carried out multiple knowledge sharing sessions with industry players and worked to create innovative Go To market strategies. For example, we would soon be launching a training program for small retailers in collaboration with one of the largest Skill Training Companies in the country. Here the retailers will be trained in setting up and managing a PDO so that they can increase their monthly income. Similarly, we are investing in long term scientific studies with leading university and research scholars across the world to quantify multiple other benefits of the PM WANI model.

Brand’s vision of creating over 1 million Wi-Fi hotspots across India; aim to provide free internet to 500 mn people in India

We believe that every person should have access to information so that they can transform their lives. The Internet is a key source of information and by setting up 1 million hotspots across the country, we want to enable 500 million people with easy access to high speed Internet for Free.

Under the PM WANI initiative, the Government wants to set up 10 million hotspots in the country. However, for this it is important to have affordable yet robust technology and business models that can support such scale. i2e1 is committed to bringing down the cost of technology drastically and has created innovative business models that help scale up PDO models really fast.

We are confident that our hotspots will be instrumental in helping millions of kids study online, millions of youth learn skills online and millions of people access information that is helpful to them.

i2e1’s technology has created two-fold advantages – reduced the cost by more than 90% and created additional revenue streams to increase revenues by more than 500%. Our technology is not only affordable but very robust and this has been validated by more than 10K clients, that include large telecom operators and some of the largest internet companies in the world.

This has been achieved by virtualizing most of the hotspot router capabilities and thereby creating a complete plug n play solution. Along with this, our machine learning and artificial intelligence-based solutions allow for multiple revenue streams. The company has already filed for few patents and there are many more to come.

i2e1 strongly believes that the Internet will be the new age highway of knowledge economy.  A world bank study suggests that 10% increase in internet penetration can lead to GDP growth by 1%.

However, a large section of the country cannot still afford high speed wired broadband. The 4G plans have a daily limit of 1.5 GB, while online classes itself can consume 3 to 4 GB per day per child.

Hence, under the PM WANI architecture, i2e1 intends to create faster and cheaper internet for the next 500 million population. Today, i2e1 is able to provide 50 Mbps unlimited internet per day for just INR 5. For the entire month, users can get unlimited high-speed internet for just INR 50. This will ensure that more and more citizens connect to the internet and use it to the full advantage. In the next 2 years, we plan to scale to 4 cities and cover them entirely with more than 400K Hotspots. This will provide high speed internet to more than 2 million users daily.  This model can be replicated across cities ensuring digitalization across the country

Anker Innovation ropes in Washington Sundar as its Brand Ambassador

“We Compensate The Startup By UP to $10,000 During The Joint Pilot”

InbaseTech celebrate life with passion and we care about our gadgets as much as you do.